Officially I’ve been in isolation for three days so far. The time has flown by. One man and his thought’s, the Russian media, white pants, a fan and a Wilson, who’d have thought it?

One day post Day-Zero, I still wasn’t quite right for the full isolation lockdown yet despite moving in the day earlier. The Leukocytes (defence cells) were still knocking around, much like the unwelcome late stragglers at the end of a house party.

But not a problem, I just further got myself comfortable for my stay. Doctor Fedorenko mentioned that ‘the TV guys’ were still coming in to film, and would that still be okay? ‘Of course Doctor!’ You know me I’m such as media tart these days. ‘Leatherhead Man Takes Russia By Storm’

Moment’s later two burly Russian fellas and a tiny producer girl walk in, draped in hospital protectors. Apparently this is for Russia’s major news station ‘Russia One’ (I keep thinking of the ONE SHOW theme), I believe that they were looking for a positive piece on Dr Fedorenko, his work and international recognition. At least that reflected on the questions they asked me. Why Dr Fedorenko and Russia etc…

I think I then spent the rest of the day editing my Day Zero video, just another regular video studio my hospital room.

Thursday – Day +02 [Isolation Time]
Woken up bright and early for some fluid deposits, I sometimes barely even notice them anymore which is nice – the benefits of being on-tap for blood with a chest catheter I guess.

Then Doctor Fedorenko comes in ‘Good news!!’. He tells me of how those Leukocyte numbers have dropped low enough to go into full isolation mode. I suppose being told that I’m about to be locked in a room without any real comforts, shouldn’t bring any joy (much like a reality TV show), but this one does. A good bit of R&R, letting my body have some good rest for once. I might even get to watch or play with some of the gadgets I brought too. …I’ve been here two weeks, they’ve barely moved from my bags. Still not sure how I’ve made myself so busy?

A small nurse who I hadn’t seen before soon comes into the room with all sorts of alcoholic, scrub and scary Russian bottles. I’m shown the Vodka bath I’m to have, using a handful of cloths to use after a rinse shower. One for the overall body and the other for the more delicate areas. For example no one wants that reminder of when you once sprayed deodorant down there. 😉

She brings me some clothes to wear too. Woah! …no it’s okay the Doctor has seen my cupboards full of enough clean clothes and underwear. That was met with lots of finger wagging and a lots of shushie, fushesh and woashisheesh noises coming from that quite stern look of hers, as she strutted around the room like a flustered Yoda.

I lift them to the light, sigh and relent. All white – badly cut under length pants and the boxiest cut top I think I’ve ever seen. I fear that I’m going to look like a very bad background artist on Tenko for the next week or a bit of an odd John Lennon sit-in.

Of course in relenting, I’ll do the pants – no harm there I guess. But I’m going to be comfortable in my t-shirt and underwear. No more film crews I hope.

So, since I’m going to be alone in the room, I guess I’d best fashion up some company. Meet (Castaway inspired) ‘Wilson’, my companion for the week ahead. Some of you on Facebook might already be acquainted with our little miserable friend.

“Wilson didn’t like my successful blood scores this morning. He’s now stuck within these four walls with me. It’s #isolation time!”

Friday – Day +03
Sadly didn’t start too brightly today. As largely fine as the chemotherapy has been, it does kind of leave your internal digestion needing a bit of care. So annoyingly there was a bit of quick hop to the loo this morning. No big deal but I think it had a bit of a knock on effect on how I felt for the rest of the day.

The good news delivered by the good Dr.F was that my Leukocytes had more than halved again on yesterday’s score. Normal numbers are between 4-10 in the blood, mine were down to 0.14. So the remainder of my previous immune system really is hanging by a thread. Blood pressure checked and I’m good for the day. …so I thought.

Doctor Fedorenko walks into the room asks how I’m doing as he always does before he leaves for the day, it’s really nice that he does this visiting everyone I believe. All good it seems, so big smiles and handshakes. Seen to be believed, there is so much to love about this bloke!

Around 2pm, my usual check up arrives. Blood pressure reasonably fine, but do say that I’m feeling the heat a little as my reading then demonstrates. (Normal 37°) I think mine was 37.6°. Quick as a flash the Doctor returns – I thought he left ages ago. He springs into action, ‘okay it seems that you’re body is a little high, it happens for around 1 in 3 patients and is easily remedied.’ – ‘We’ll put you on a course of steroids and antibiotics to make sure everything is clear and give you regular monitoring’. ‘But you have nothing to worry about!!’ – I was feeling absolutely calm, only warm, but his reassurance is always welcome.

Very quickly in come the drips and I’m hooked up. Little more than ten minutes later I’m feeling cool, comfortable together with a fan in my room to boot too.

I was checked pretty much on the hour for the remainder of the day whilst my temperature fluctuated between 36.8-37.1°. Dr Nikolai also comes in later, saying that they’d thoroughly gone back over my mornings blood test and it shows nothing untoward. Talking about the diarrhea I suffered in the morning, perhaps just setting things off on the wrong foot and to let them know should it happen again.

Today the nurses were amazing, bringing me all the fluids I needed with constant checks and positive smiles when the scores were happy.

I upload my Day-Zero video. Just some thought’s about my day (a bit gushy). Which everyone has been so lovely about. Thank you!!

As the evening roles in, still feeling comfortable, I think about making the most of it and getting my head down around 9pm. Let’s hope to start a little better tomorrow.

So another minor hiccup on the road to Getting Rid. If it’s not me out gallivanting for a coffee, I’m somehow raising my temperature for something to write about. You didn’t want a boring blog now did you. You’re welcome. 😉 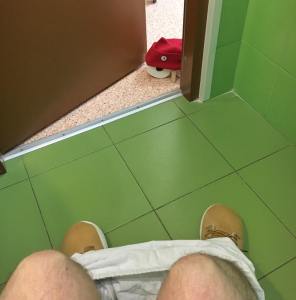 That’s the third time this morning Wilson has done this. We need to talk! …just not now!! ‪#‎isolation‬

More checks this morning from the nurses, all good. Another update from Dr Fedorenko about my blood test – no infections and my Leukocytes have halved yet again. Down to just 0.07. It’s believed that this will carry on for the next couple of days, dropping off the scale before the stem cells kick in with their new party piece.

And nothing really more to add today – it’s a day in isolation, but a good one. Again the nurses have been extra attentive, but not quite with the previous frequency as needed before.

‘I snook this picture of Wilson earlier on and threatened that I’d upload it if he didn’t stop picking his nose. Here it is then. #isolation’

8 thoughts on “Isolation – How’s it going so far?”